What Others Are Saying

"The fact that since 1986 Mike Fuljenz has won so many major awards in so many diverse categories, including the NLG top award 'The Clemy,' underscores how important his peers in the rare coin and precious metals markets view Mike's excellent analysis and reporting."
Ed Reiter, Executive Director,
Numismatic Literary Guild &
New York Times Former Columnist
"The Congressional Medal of Honor Foundation salutes Mike Fuljenz for all he does to support our men and women in uniform who defend our freedoms."
Nicholas Kehoe, Former President
Congressional Medal of Honor Foundation & Lieutenant General USAF (Ret)
"Count me among Mike Fuljenz's numerous admirers. His strong leadership, input and support of the American Numismatic Association were instrumental in formulating ANA's coin grading and authentication policies, which is a testament to his commitment to the industry. He is a leader in the coin industry."
Robert Leuver, Former Director,
Bureau of Engraving & Printing
Former Executive Director,
American Numismatic Association

"Mike Fuljenz has been a member in good standing of the American Numismatic Association (ANA) since 1980. Mike has taught seminars for ANA almost every year since 1982 on advanced coin grading, detection of counterfeit coins, and our "super course" on gold, silver and commemorative coins…He is simply a terrific teacher."
James Taylor, Former Director,
ANA Educational Services

PRESS RELEASE: (Colorado Springs, Colorado) – Michael Fuljenz, President of Universal Coin & Bullion in Beaumont (www.UniversalCoin.com), has been named the 2021 Dealer of the Year by the Congressionally-chartered American Numismatic Association (ANA www.money.org). He will be honored at an awards banquet at the organization’s World’s Fair of Money® in Chicago on August 13.

In announcing his selection as Dealer of the Year, the 28,000-member, nonprofit association noted: “He is not only an outstanding numismatic educator and community leader, but he has also helped many collectors and dealers who were victims of fraud.” In one case, Fuljenz helped a Louisiana physician obtain a $1 million refund from an unscrupulous merchant who sold him counterfeit gold coins.

“I am truly grateful for the Dealer of the Year recognition from such a renowned, national organization as the American Numismatic Association. All my professional and personal life, from teaching high school chemistry and physics to active involvement in the community and leading a prominent, nationwide rare coin and precious metals dealership, I have strived to provide both useful education and the highest quality products and service,” said Fuljenz.

He has won more than 60 prestigious national and regional honors for his consumer education and protection work in rare coins and precious metals, including awards from the Press Club of Southeast Texas, the Numismatic Literary Guild and has been honored as Humanitarian of the Year by Catholic Charities of Southeast Texas. He received an Honorary Doctorate in Humane Letters from McNeese State University in 2015.

A respected community leader for his tireless volunteer work on behalf of Lamar University and other educational, athletic, civic, and church organizations in his hometown of Beaumont, Mike also has served with distinction as a consultant to the Better Business Bureau, Texas Attorney General, Federal Trade Commission, United States Mint and Royal Canadian Mint. He serves on the Boards of Directors of the influential National Coin & Bullion Association, Crime Stoppers of Southeast Texas, and is a member of the Professional Numismatists Guild (PNG) and is a PNG Accredited Precious Metals Dealer.

The American Numismatic Association’s Dealer of the Year award is presented annually since 2009 to honor a professional numismatist who shows uncommon dedication to strengthening the hobby and the association, and who displays exemplary ethical standards as a numismatic dealer. The association’s headquarters are in Colorado.

Founded in 1994 and accredited by the Better Business Bureau, Universal Coin & Bullion is a rare coin and precious metals leader with collector and investor clients nationwide. Today, there are more than 60 employees in the company’s Beaumont offices.

For additional information, contact Universal Coin & Bullion in Beaumont at 877-899-8380 or visit online at www.UniversalCoin.com. 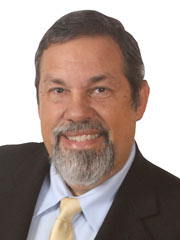 “Some critics of ‘In God We Trust’ may be ignorant of the phrase’s legal history or are deliberately ignoring the rulings of courts and resolutions of Congress,” admonishes Michael Fuljenz.

(Dallas, Texas) – Educator and acclaimed numismatic writer Michael Fuljenz will give a free, informative presentation on the national motto, “In God We Trust,” in Dallas on Friday, March 4, 2016.  The public is invited.

The program will be presented during the American Numismatic Association’s National Money Show.  The show is a family-friendly, educational event, and will be held in the Kay Bailey Hutchison Convention Center, 650 Griffin St., in Dallas, March 3 – 5.

The 45-minute presentation by Fuljenz entitled, “The Untold Story of ‘In God We Trust’ and its Ties to the National Anthem,” will start at 11:00 am on March 4 in Room 302 of the convention center.

“Some critics of ‘In God We Trust’ may be ignorant of the phrase’s legal history or are deliberately ignoring the rulings of courts and resolutions of Congress,” explained Fuljenz of Beaumont, Texas who has written award-winning articles about the national motto (www.InGodWeTrustOnMoney.com).

Commenting on the recent controversy about the motto’s placement on police vehicles in some communities, Fuljenz explained: “The patriotic motto has withstood a long line of legal challenges to appear on our money and on government-owned property.  Courts have ruled that the motto can remain for ceremonial and patriotic reasons and tradition.”

“It first appeared on circulating United States coins in 1864.  It has been on all our coins since 1938, became the only official national motto in 1956 with the signing of legislation by President Dwight Eisenhower, and has appeared on all our paper money since 1966,” said Fuljenz.

In January, a lawsuit was filed in Ohio seeking to remove the phrase from U.S. coins and paper money.

In 2013, a Federal Court judge in New York dismissed a lawsuit seeking removal of In God We Trust from our currency.  The judge noted that “the U.S. Supreme Court has repeatedly assumed the motto’s secular purpose and effect.”  In 2011, the U.S. House of Representatives overwhelmingly approved a resolution reaffirming it as the national motto and encouraging its display in all public schools and government buildings.

Fuljenz pointed out that while the motto first appeared on U.S. coins at the time of the Civil War, it actually was inspired by events a half century earlier during the War of 1812.

“In 1861, Treasury Secretary Salmon Chase received a letter from a Pennsylvania minister who requested ‘the recognition of the Almighty God in some form on our coins.’   Chase instructed Mint Director James Pollock to prepare a motto.  Pollock recalled a lyric in the now-seldom sung fourth stanza of The Star Spangled Banner: ‘And this be our motto – In God is our trust.’  Pollock had the words, ‘GOD OUR TRUST,’ placed on a few experimental patterns being tested in the early 1860s for proposed new designs for half-dollar and $10 denomination coins,” said Fuljenz.

“After consultations and debate within the Treasury Department, the words, IN GOD WE TRUST, first appeared in circulation on a new coin denomination, copper two-cent pieces, starting in 1864,” Fuljenz added.

Admission to the lecture is free.  Admission to the National Money Show main floor on Thursday and Friday, March 3 and 4, will be $8 for adults, free for children.  A $2 discount coupon is available online at www.NationalMoneyShow.com.  There will be free admission for everyone on Saturday, March 5, when numismatic experts will be available to give complimentary verbal appraisals of the public’s old coins and paper money.

A former high school chemistry and physics teacher and principal of the Governor’s gifted students program in Louisiana, Fuljenz has served on the Diocese of Beaumont Catholic School Board since 2007 and was President from 2010 to 2012.  He was honored with the Catholic Charities Humanitarian Award in 2013.

Known as America's Gold Expert®, Michael Fuljenz has won more than 50 prestigious national and regional awards and honors for his consumer education and protection work in rare coins and precious metals.  He recently received an Honorary Doctorate in Humane Letters from McNeese State University.  A respected community leader in his hometown of Beaumont, Texas, Mike also has served with distinction as a consultant to the Federal Trade Commission, United States Mint and Royal Canadian Mint, and is on the Board of Directors of the Jefferson County Texas Crime Stoppers organization and the Industry Council For Tangible Assets. 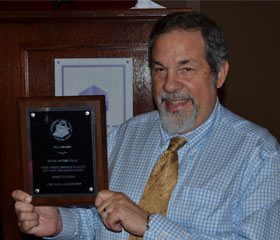 Mike Fuljenz proudly holds his 2015 Book of the Year Award at the Chicago World's Fair of Money. 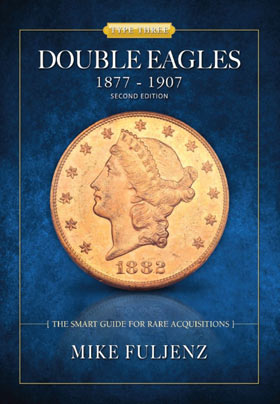 Type Three Double Eagles 1877 - 1907, 2nd Edition, by Mike Fuljenz has been named Book of the Year by the Numismatic Literary Guild.

“I’ve received many honors for my writing the past three decades, but this is the first time I’ve received the Book of the Year award. I’m grateful for the recognition given to me by the top literary organization in numismatics citing it as the work with the greatest potential impact on numismatics,” said Fuljenz.

Over the years, he now has won 56 awards from the NLG for his consumer protection and education newsletters and earlier books and articles.

The awards were presented on August 13, 2015 during the American Numismatic Association World’s Fair of Money in the Chicago suburb of Rosemont, Illinois.

Fuljenz also received an award of appreciation from the Numismatic Crime Information Center (NCIC) and its founder, former Pantego, Texas Police Chief Doug Davis. The award plaque reads: “Presented to Mike Fuljenz in recognition of your continuous support, dedication and contributions to NCIC in the fight against numismatic crime.’

Follow the link and learn how to kill head lice fast and safe and get your hair back to its normal condition.

Fuljenz has previously been a featured speaker at other Numismatic Crime Information Center seminars in other cities, and he is on the Board of Directors of Crime Stoppers in his hometown of Beaumont, Texas.

Known as America's Gold Expert®, Fuljenz has won dozens of prestigious national and regional awards and honors from the NLG, the Press Club of Southeast Texas and other organizations for his consumer education and protection work in rare coins and precious metals. He is now the recipient of the top three awards annually presented by the NLG: Book of the Year (2015); the “Clemy” Award (2013), the organization’s highest honor; and the James L. Miller Award (2013) for best overall story or article.

A respected community leader in his hometown of Beaumont, Texas, Mike also has served with distinction as a consultant to the Federal Trade Commission, United States Mint and Royal Canadian Mint, is on the ICTA Board of Directors and is a member of the Professional Numismatists Guild. 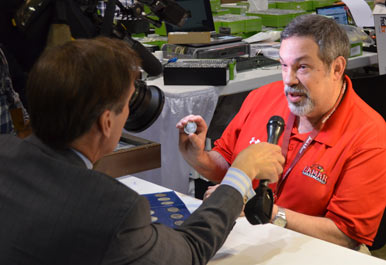 Fuljenz was praised for his excellence in consumer protection and education efforts as well as outstanding service to the numismatic hobby and profession. The awards were presented by the Congressionally-chartered American Numismatic Association (ANA), the Professional Numismatists Guild (PNG) and the Numismatic Literary Guild (NLG).

He also was interviewed about the gold market by Fox Business Network in a live broadcast segment from the World's Fair of Money.

"We congratulate Mike Fuljenz on this much-deserved recognition of his expertise in the world of collectible coins and precious metals," said Doug Hamlin, Executive Director, NRA Publications.